Reads Against Oblivion: 13 Essential Books About the Holocaust

At least 6,000,000 people, more than 3.5 times the population of Manhattan, were killed during the Nazi regime between 1939-1945 in Europe. It happened not long ago and not far away. However, according to a recent study released by Schoen Consulting in the United States, ignorance about the Holocaust, one of the most significant episodes in recent European history, is increasingly evident.

More than 40 % of Americans (a percentage that increases among the youngest population) confess ignoring what happened in Auschwitz, the largest and most lethal German Nazi camp where 1,100,000 children, women and men found their way to death and only some lived to talk about it.

Now that the passing of time silences the voices of the last survivors of the Holocaust, it is more necessary than ever to evoke the memory of the witnesses of one of the greatest crimes ever committed in Europe.

Dr. Piotr Setkiewicz, director of the research center of the Auschwitz-Birkenau State Museum, highlights 13 essential readings to fight against oblivion and raise awareness of the danger of the limits of human cruelty and the germ of what triggered in these long years of the twentieth century.

Names like Charlotte Delbo, Primo Levi or Witold Pilecki believed in the importance, or the need, to record what happened behind the fences of the German Nazi concentration camps:

Tadeusz Borowski – “This Way for the Gas, Ladies and Gentlemen” (1946)

Written in the immediate postwar period, the story of Tadeusz Borowski describes daily episodes of life in the Auschwitz and Dachau concentration camps: the arrival of crowded trains, the selection of prisoners, gas chambers and normalization of brutality are some of the aspects covered by the author. 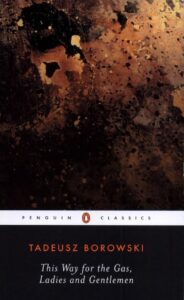 It is the author’s own account of her experience during 1939-1945 growing up in the Warsaw ghetto and her eventual deportation, imprisonment, and survival of the Majdanek, Auschwitz, Ravensbruck, and Neustadt-Glewe camps.

French writer Charlotte Delbo was arrested, imprisoned and deported to Auschwitz in 1941 for being part of the resistance movement. Later, in 1944 she was transferred to the Ravensbrück camp from where she would be released later that year. In her trilogy ‘Auschwitz and later’, Delbo’s poems, vignettes and texts relate her own experiences during and after her years of imprisonment at Auschwitz. 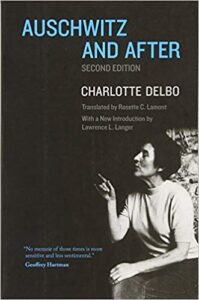 Austrian psychiatrist Viktor Frankl develops in this memoir the psychotherapeutic method known as ‘logotherapy’, a conviction that the primary human drive is not pleasure but the pursuit of what we find meaningful. Based on his own experience and the stories of his patients in concentration camps, Frankl argues that we cannot avoid suffering but we can choose how to cope with it, find meaning in it, and move forward with renewed purpose.

The Nobel Prize for Literature (2002) Imre Kertész wrote this novel reflecting his own experience as a prisoner of Auschwitz and Buchenwald in the young Hungarian character, Georg Koves, deported with 14 years from Budapest to Auschwitz. Kertész’s novel is an illustration of the reality of the death camps in their inhuman everyday life. 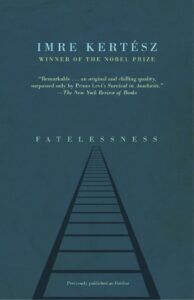 Rena arrived in Auschwitz on the first transport of Jewish women in 1942. Days after her arrival, her sister Danka also entered as a prisoner. Rena’s story is based on the struggle for the survival of these sisters for more than three years in Auschwitz, and the fight to fulfill the promise Rena made to her mother just before the family was separated: keep her sister safe.

The first part of the Auschwitz Trilogy Primo Levi’s account on the day-to-day life of the author and his companions as prisoners in Auschwitz. Levi’s story shows the limits of the author’s strength, who manages to survive despite being a witness and victim of the systematic cruelty to which he was convicted during his imprisonment in the German concentration camp.

Sequel to Primo Levi’s classic memoir of the Holocaust, Survival in Auschwitz. It narrates the story of his journey home, after liberation from Auschwitz, in January 1945 to Italy by way of the Soviet Union, Hungary, and Romania. Levi’s railway travels take him through bombed-out cities and transit camps; he describes the former prisoners and Russian soldiers he encounters along the way. 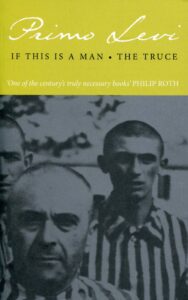 In 1941, Witold Pilecki, a member of the Polish resistance during the Holocaust, voluntarily entered Auschwitz to provide information to the Allies of what was happening between the gates of the German Nazi camp. After almost three years infiltrated, Witold escaped from Auschwitz in 1943 and wrote this detailed and extensive document known today as the “Witold Report”. It is the first source document about the German concentration camp.

Seweryna Szmaglewska was sent to Auschwitz in 1942 for involvement in the resistance movement. After three years in Birkenau, in January 1945 she managed to flee an evacuation transport and immediately began writing this book. Considered the first statement about Auschwitz-Birkenau, Szmaglewska’s book was included as evidence in the Nuremberg trials in 1946, and the author called to testify.

Elie Wiesel was only a teenager when, in 1944, he and his family were deported from his native Sighet in Transylvania, to be sent to Auschwitz and then to Buchenwald. The Night is the record of Elie Wiesel’s memories of his family’s death, the death of his own innocence and his role as a witness and victims of the horrors of the Holocaust. 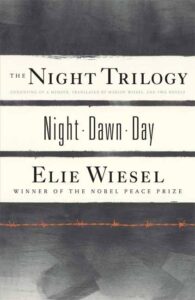 “Amidst a Nightmare of Crime: Manuscripts of Prisoners in Crematorium Squads Found at Auschwitz (The Scrolls of Auschwitz)” (1973)

In the crematorium of Auschwitz-Birkenau, numerous manuscripts of the prisoners working in the crematorium were buried. All these manuscripts compose this writing that reveals their plans to organize a revolt for months, and their concern to record and communicate the atrocities they were living in Auschwitz.

The official catalog of the first-ever traveling exhibition about the Auschwitz concentration camp -coproduced by Musealia and the Auschwitz-Birkenau State Museum-, where 1.1 million people―mostly Jews, but also non-Jewish Poles, Roma, and others―lost their lives.

More than 280 objects and images from the exhibition are illustrated herein. Drawn from the Auschwitz-Birkenau State Museum and other collections around the world, they range from the intimate (such as victims’ family snapshots and personal belongings) to the immense (an actual surviving barrack from the Auschwitz III–Monowitz satellite camp); all are eloquent in their testimony.

An authoritative yet accessible text weaves the stories behind these artifacts into an encompassing history of Auschwitz―from a Polish town at the crossroads of Europe, to the dark center of the Holocaust, to a powerful site of remembrance.

The catalog‘ Auschwitz. Not Long Ago. Not Far Away’ (2019) is available at The Pickman Museum Shop in the Museum of Jewish Heritage – A Living Memorial to the Holocaust, where the exhibition is currently displayed. It can also be found at Abbeville Press through Amazon: https://amzn.to/32yMiJR