Escaping from the Third Reich: The story of Gertrud Fröbergca

This article was written by Malmö Museer.

Malmö Museums is southern Sweden’s largest museum. The museum tells in its exhibitions about Nordic region history, nature, technology and shipping, and presents a dozen temporary exhibitions on different themes each year. They lend a unique Red Cross uniform, on display at the Auschwitz exhibition along its Malmö stop.

ESCAPING FROM THE THIRD REICH: THE STORY OF GERTRUD FRÖBERG

In the spring of 1945 at the end of World War II Germany was losing the war. Britain was bombing the country day and night. That was when the Swedish Red Cross implemented a major rescue operation to fetch prisoners out from the Nazi concentration camps.

When the British heard about the rescue operation, they demanded all the buses to be painted white with the Swedish flag on the sides and the red cross on the roof. That would make the buses easier to detect from the air. That is how the rescue operation came to be called the White Buses.

In the middle of February, 1945, the vice-president of the Swedish Red Cross, Folke Bernadotte, began negotiating with Heinrich Himmler. Himmler was Germany’s Minister of the Interior and head of the Gestapo, the German secret police. All the decisions and negotiations were kept secret and occurred behind the back of Adolf Hitler. If he had found out about the rescue operation it would have been prevented.

At first, Himmler refused to free the prisoners. Finally, he agreed to assemble all the Scandinavian prisoners in the Neuengamme camp outside Hamburg. Only old people, sick people, and mothers from Norway and Denmark were allowed to leave Germany. Bernadotte and Himmler met four times. After each meeting the Swedish Red Cross gained permission to fetch more prisoners out of various camps.

On the evening prior to the last meeting on 21 April the Swedish negotiator Norbert Masur, who represented the World Jewish Congress, was also allowed to meet Himmler. Masur’s special task was to get as many Jews as possible freed. When Bernadotte later met with Himmler one last time he was given permission to take anyone he wanted and as many as he wanted.

The rescue operation concluded on May 1, 1945, before the war ended. But the Swedish Red Cross continued to rescue people. During the Spring and Summer about another 10,000 men and women came to Sweden.

In total, about 15.000 people were rescued from Nazi concentration camps.

In addition about 1,500 Swedes who lived in Germany were rescued.

Of everyone who was rescued, half were Scandinavians and about 7,000 were Polish citizens.

During the rescue operation 36 swedish military buses were used.

The personnel consisted of 308 people, all volunteers.

When the rescue operation was expanded a large number of danish vehicles and personnel joined up.

Friedrichsruh castle outside Hamburg was used as the headquarters for the personnel and vehicles.

During the rescue operation the drivers drove day and night to fetch prisoners from various concentration camps. The trips took between one and five days. There were two drivers in every bus and they took turns to drive.

Fuel, food and medical supplies for the prisoners were loaded onto trucks. Messengers on motorcycles rode ahead to make sure the roads were passable.

It was a highly dangerous mission as allied airplanes were bombing Germany around the clock. During one trip home from Ravensbrück camp, the vehicles were shot at and the Swedish driver Erik Ringman died together with a number of the liberated prisoners. 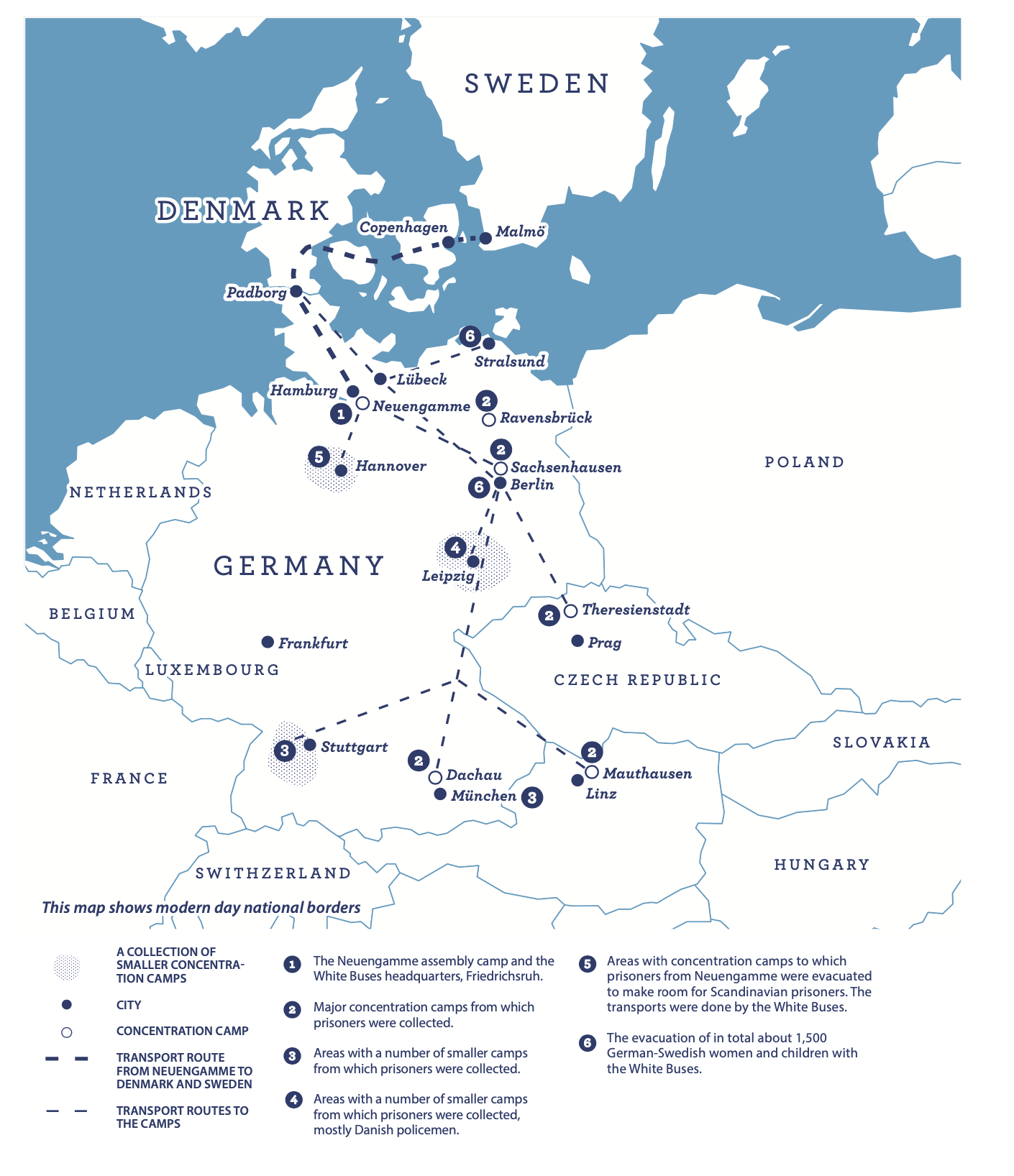 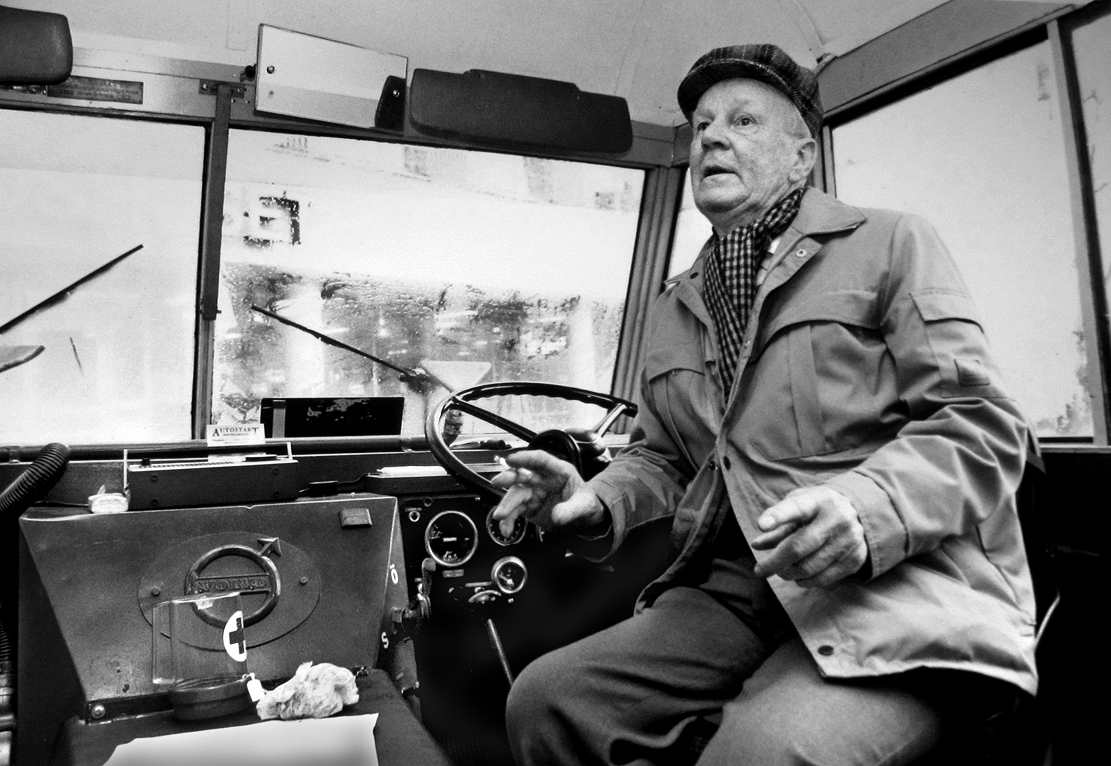 CHOOSING ONE PERSON BEFORE ANOTHER

The primary task of the White Buses was to bring Scandinavians home. Himmler ordered that the Scandinavian prisoners were to be assembled in the Neuengamme camp which quickly became overfull. Therefore, the White busses had to transport sick prisoners to other camps in Germany. The drivers faced an ultimatum – they were forced to select who would go and who could stay.

“27 March. At 13.30 all the buses plus four of our trucks left to drive German political prisoners, that is, Belgians, Dutchmen, Poles, Germans and others, from Neuengamme to Braunschweig.

This was done to make room for Scandinavian interns in Neuengamme. These prisoners were in a desperate condition, starved and beaten. The convoy returned at about 07.00 the following day.”

How do we choose one fellow human being over another? Above all, did they have any real choice? Many of the prisoners who were moved between the camps died but a number of them survived.

THE STORY OF GERTRUD FRÖBERG

Gertrud was one of the people who received the refugees who arrived at Malmö in the spring of 1945. She had volunteered for the Red Cross for many years and been trained to help the refugees.

Gertrud worked in the sanitation teams. She undressed the people, washed them, and sanitised them with DDT to kill fleas and lice.  One 26 May 1945 Gertrud was hastily taken by ambulance to the isolation unit of Malmö Hospital and died nine days later.

She had contracted typhus. She was survived by her husband, Nils Fröberg, and their one-year-old son, Bo.

Malmö Museer has lent out Gertruds Red Cross costume to Auschwitz. Not long ago. Not far away. now on display in Malmömässan. The costume can usually be seen in Malmö Museers exhibition Välkommen till Sverige  (Welcome to Sweden).