Seven months after the launch of the exhibition ‘Auschwitz: Not long ago, not far away’ in Madrid, the insides of three books in the exhibition are now on public display.This has been made possible by new support stands that let the books be displayed open, allowing them to be better appreciated by visitors.

Details of the three books are provided below. 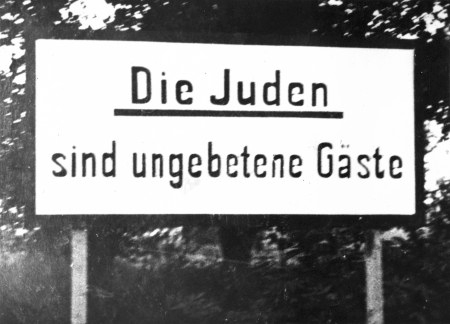 In 1935 the German Jew Werner Fritz Fürstenberg, who had moved to the Netherlands, traveled to Berlin by motorcycle. Along the way he photographed signs outside towns and villages proclaiming, “Jews not welcome.” What is striking is how each sign is different, despite their similar messages. Rather than ordering signs from the Nazi leadership in Berlin, local communities made their own and posted them on the edges of their towns. The photographs in the album fill 14 pages.

Collection of the The Wiener Library.

Collection of the Auschwitz-Birkenau State Museum. 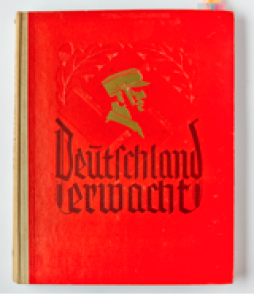 These photos from the book Deutschland Erwache suggest why many Germans joined the Nazis. They admired the Nazis’ boundless confidence that change was possible. In addition, the bold design of the swastika, the uniforms and salutes adopted from Italian fascism, the processions copied from the military, the mass rallies lifted from the sports world, and the language and relics of Christian martyrdom suggested unity, passion, and purpose. The Nazis only needed a political, social, or economic catastrophe to become a viable political force. The Great Depression, which hit Germany in 1930, fit the bill. The austerity politics adopted by the Weimar government proved both impopular and ineffective. As unemployment rose to over four million, many became convinced that Hitler might offer a viable alternative. On January 30, 1933, Reich President Paul von Hindenburg invited Hitler to form a government. Hitler accepted. Within two months he destroyed German democratic institutions and established a Nazi dictatorship.

Originals in the collection of Musealia.