The Devil is in the Details

The Hoecker Album, documenting the tenure of Karl Hoecker as adjutant to SS Major Richard Baer, the third and last commanding officer of the Auschwitz compound, is one of the stranger artifacts in our collection.  Although almost all the photos were taken during the final six months prior to the evacuation of  Auschwitz, nothing illustrates torture, starvation, or murder and none even show prisoners.  Rather the photos depict the normality of the daily life of Hoecker and his fellow officers. One seemingly innocuous photo shows a joyful crowd of SS comrades singing together, accompanied by an accordionist. However, as historians working at the U.S. Holocaust Memorial Museum and in Germany closely analyzed the photo, its hellish context emerged.

Upon early examination it became noticeable  that people were standing according to rank; officers in front, and rank and file SS behind them.  Several easily recognizable officers stood in the front row, including the founder and first Camp Commandant SS Lt. Colonel Rudolf Höß, the commandant of Auschwitz-Birkenau SS Captain Josef Kramer, the infamous camp doctor Dr. Josef Mengele and Hoecker himself. As we became more familiar with the album, we learned the names of other high-ranking officers also prominently standing in front. However, one man in the front row was wearing the uniform of a sergeant. Who was he and why did he deserve to stand in the front with the officers instead of with his fellow sergeants?  Through crowd sourcing, we discovered that he was none other than Otto Moll, the head of the crematoria and protégée of Rudolf Höß. Survivors identified Moll as one of the most sadistic SS men at Auschwitz. Then, a final breakthrough came when German historian Dr. Stefan Hördler identified Anton Thumann, formerly head of the prisoner compound at Majdanek standing next to Mengele.  Thumann only spent one week in Auschwitz in late July 1944; the same week that the Hungarian Action ended, which had resulted in the murder of  some 350,000 Hungarian Jews in the space of only two months.  With this final identification we comprehended the previously hidden significance and horror of the photo.  This was no mere sing-along and pleasant diversion, but rather the celebration of the culmination of deadliest months of the Auschwitz killing machine. With the Hoecker Album, the devil truly is in the details. 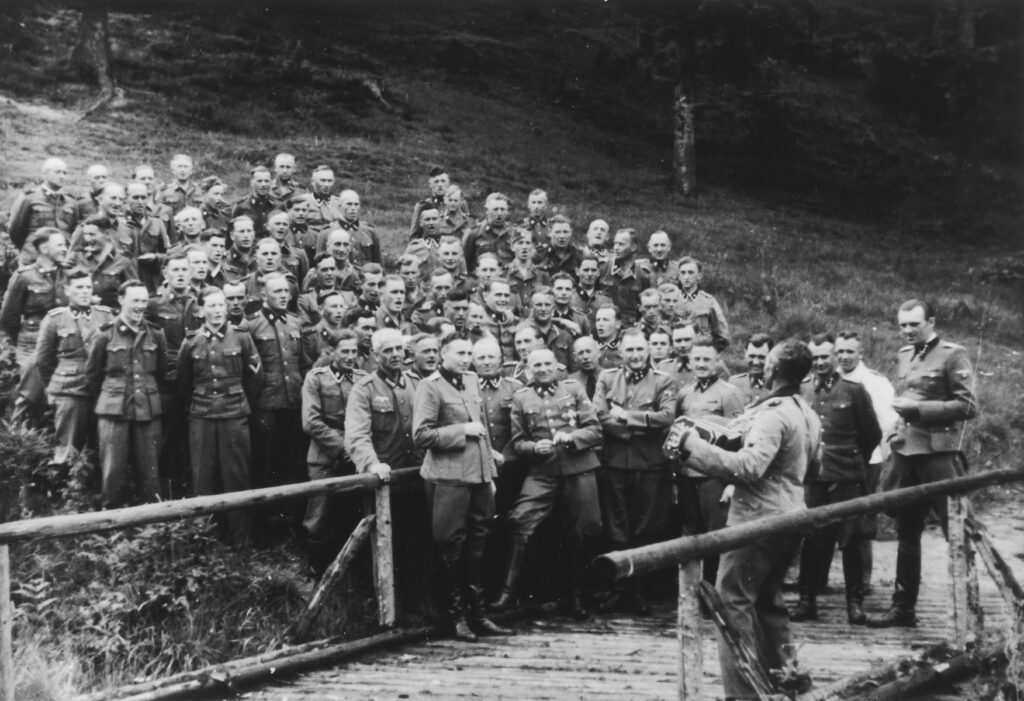 An accordionist leads a sing-along for SS officers at their retreat at Solahuette outside Auschwitz.

From a material perspective, the Hoecker album is notable for the forethought that went into assembling it. The album pages, likely part of a set that originally came with an album cover, are of the kind that could have been bought in most stationers’ shops at the time. The album Hoecker picked out, however, is a top-shelf product, with heavy, thick, smooth pages that were a creamy white.  It would have cost a bit more than other options. It is a striking contrast, the image that Hoecker tries to present of himself with his selection of photographs, as a dashing officer, enjoying shooting practice, his dog, and jolly company, with that of the man sitting in his quarters with a ruler and a pot of glue, carefully positioning flattering photographs on album pages, and painstakingly captioning them in his best handwriting.  It appears that he is recording the best time of his life, and he wants to remember it forever.

When we received the album, it had been poorly stored in a storage shed for decades. The cover, if the album had even been assembled, was missing, and the pages were likely not in their original order.  The glassine overleaf attached to the front of each album page had been torn away, leaving only fragments. The album pages were soiled and stained, warped from moisture, and covered in frass, or insect excreta. Conservation treatment of the album pages involved cleaning the surfaces of the pages and photographs, and under a microscope, picking away the frass. Other than the dirt and stains, the pages were surprisingly intact. All of the photographs were still securely glued down, and there were no empty spaces, indicating no photographs were missing. One broken corner of a page needed to be reattached, but there were no other tears.

After conservation treatment, the Museum was able to display some of the album pages in the exhibit Some Were Neighbors: Collaboration & Complicity in the Holocaust, and to digitize images of the pages for the Museum’s collections website (Collections Search).

Hoecker wanted to preserve his memories of his wartime service, and he was successful, but not in the way he intended. He chose, perhaps unwittingly, high-quality materials, securely attached his photographs, and meticulously captioned them, choices that kept the album largely intact and able to provide modern scholars with insight into camp life for a Nazi officer. Hoecker was holding on to what were highlights for him in his story, but today we notice what he chose to ignore around him, and this is what incriminates him. The contents of the album, the photographs and his captions, show us how he wants to be seen, but we see his character and his priorities by what he omits.